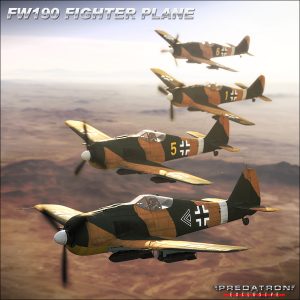 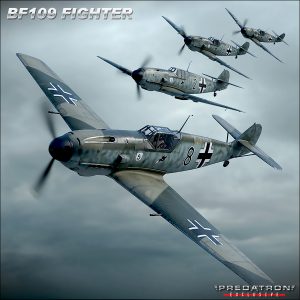 This was arguably the most successful fighter plane of the second world war. The Focke Wulf 190 was used throughout the war from 1941 onward and was very adaptable in many different roles.

All ailerons, elevators and rudder move, as well as a retractable undercarriage. The canopy slides backwards. Inside the cockpit the control stick can also move. The propeller can rotate and also includes a separate circular plane for application of a blurred image for flight. There are control dials to set plane in flight mode, landed and crashed. Central and wing bomb racks can be hidden.

Polygon count for the aircraft is only 43517 and is adapted for Sub-D. The pilot comes in at 13157 polygons. All are adapted to use Sub-D levels.

There are essentially 4 different material sets for this aircraft, with each having 4 separate Geschwader markings. These texture versions reflect conflicts fought in Africa, Western and Northern Europe. All included materials come with both a high resolution and low resolution version. In most cases this means 4K and 2K maps respectively.

This model is optimised for DAZ Studio and Iray. For those wanting to know more about the FREE program called DAZ Studio please go to https://www.daz3d.com/register-for-daz-studio