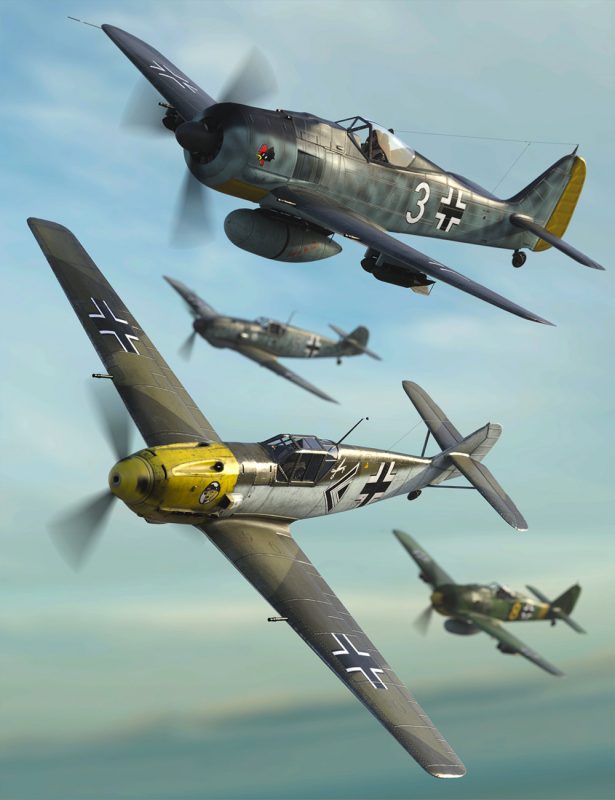 The WW2 Axis Warplanes Bundle is a highly detailed bundle of 2 iconic fighter planes of World War 2, the Messerschmidt BF109 and the Focke Wulf 190. This bundle also includes a set of Luftwaffe Ground Support Equipment.

BF109 Fighter
The BF109 Fighter Plane, built by Messerschmitt, is one of the most iconic airplanes of the Second World War. For much of the war, this was the main battle fighter of the Luftwaffe.

FW190 Warplane
This was arguably the most successful fighter plane of the Second World War. The Focke Wulf 190 was used throughout the war from 1941 onward and was very adaptable in many different roles.

Luftwaffe Ground Support Equipment
This is a set of detailed Luftwaffe Ground Support Equipment props that might have been found on many Luftwaffe airfields during World War 2. It includes a fully-functioning bomb handling cart, a storage crate, a jerry can, maintenance step ladders, an oil drum, an oil drum fitted for refuel, a toolbox, hand tools, and a large, camouflaged netting useful to conceal fighter aircraft.

All of them are optimized for Daz Studio and Iray.

Check out these in the store here: